This is the first time I have had two pieces published in the same issue of a literary magazine–in two different genres! “Creosote Reverie” and “The Strange End of Laura Farnsworth’s Marriage” appear in the Fall 2019 edition of Smoky Quartz, put out by the Monadnock Writers’ Group.

I wrote about the impetus for “Creosote Reverie” in the following blog post: “I’m Not a Poet & I Know It.” As it turned out, I revised the poem several times until it became the version that appears in Smoky Quartz. The following photograph of me (c. 1968) standing next to the outhouse my dad built for our camp in the Vermont woods represents a creosote memory that appeared in the original draft of the poem and subsequently got cut. (Large outhouse hole and beady chipmunk eyes in the dark just didn’t set the right tone.)

“The Strange End of Laura Farnsworth’s Marriage” has an even more checkered history, having started out as part of a failed novel, which I desperately tried to save in a many ways as possible: “Failed Novel Anyone?” 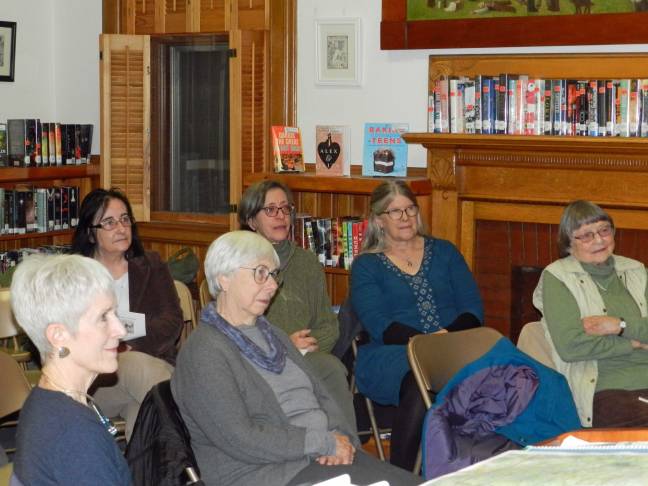 Perhaps the best part of the publications was being invited to read for the launch of Smoky Quartz: On the Road!, a program instituted by the editors of the journal to introduce the work of contributors to a wider community. The event was held at the Ingalls Memorial Library in Rindge, New Hampshire, which, as it turned out, was an adventure in you-can’t-get-there-from-here–in rush hour! After a very tense ride, my husband got me there with a minute to spare, and we had a lovely evening. He even surprised me by purchasing the poetry chapbook written by one of the other Smoky Quartz contributors. You can expect a review of it here in due time. (My To-Be-Read pile keeps growing as my writing community expands!)

Until next time, thanks for stopping by to read my latest. I appreciate your taking the time!