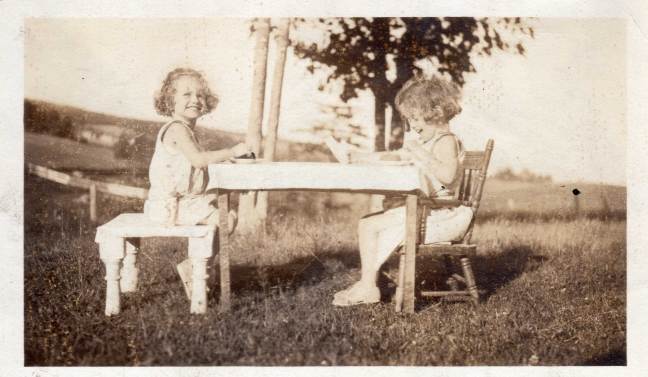 Today’s blog post began back in May, with a comment I made in response to Robbie Cheadle’s recipe for corn bread on her blog, “Robbie’s Inspiration”: #Flashfiction – Extra Nutrition.  I commented that my favorite corn bread is made in a cast-iron skillet, and she suggested that I share it. Naturally, I agreed. However, I can’t just plop a corn bread recipe on my writer’s blog apropos of nothing, so I’ll have to meander my way to it . . .

In the header photo, my mother and her twin sister are enjoying a tea party at the Economy Point farm in Nova Scotia. Their menu is lost to time, but let’s just pretend they’re eating shortnin’ bread. They are seated at the little red table my grandfather made them for playtime.

My little brother George and I also sat at that table for playtime, which often included listening to records. One of our favorites was American Folk Songs, in particular “Mama’s Little Baby Loves Shortnin’  Bread.”

I went to YouTube to find the version of the song I remember from childhood, only to discover that early recordings of the song are quite racist, as is John Whitcomb Riley’s poem based on the song.

So I’ll share Mississippi John Hurt’s version instead, as it conveys the innocent spirit of the song I remember from childhood. I’ll also share The Tractors’ rendition of the song because they completely transformed it to their signature style, yet the song is still recognizable. And, well, they’re The Tractors.

Shortnin’ bread could be made with either flour or cornmeal. Corn bread is also made with cornmeal. George and I ate our corn bread with lots of butter and molasses.

And here is my favorite recipe for corn bread!