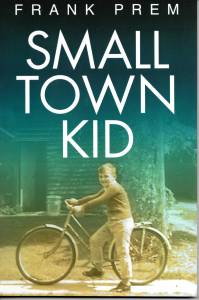 Frank Prem’s memoir in verse, Small Town Kid, opens with a poem titled “I can hardly wait to show you.” This poem is a direct invitation to the reader to “take my hand in the main street / of this town hewn from honey granite / I will tell you what once stood here and there / and you might help me rediscover what I knew / when I was in the springtime of my life.”

This was an invitation that proved itself irresistible. I walked with the speaker through his early childhood, his world defined by his family and their ethnic heritage–to the dawning of civilization for his small town when outhouses were replaced with sewerage lines–to his schoolboy days of hijinks and lessons learned–to his adolescence and young adulthood when he began to realize that “we were just kids / watching time pass away / in a place where open space / formed the barriers and walls / of nowhere to go.”

Perhaps most striking about this collection of poems is the voice. The speaker’s voice is authentic, accessible, and compelling. This is a voice with stories to tell and truths to impart, a voice I want to listen to. In addition to the voice of the primary speaker, the poet skillfully interweaves other voices, the voices he would have heard growing up.

I also appreciated the touches of wry humor threaded throughout the collection as the adult speaker looks back on the foibles of childhood: the watchers from below of an outhouse user (“halfmoon at the trapdoor”)–a boy’s hatred of the barber who gave him a short-back-and-sides “like a little boy / or an old man” (“hating whitey”)–and a schoolboy’s blaming his poor grade in art on the teacher, his flirting with the girls having had nothing to do with it (“state of the art”).

In terms of craft, the poems are written with short lines, no punctuation, and no capitalization except for the first-person “I,” all of which work well to convey the fluidity of memory and the interplay of past and present. Also noteworthy is the use of concrete sensory imagery: the sights, sounds, and smells of this particular childhood.

Small Town Kid is very much a memoir of place, rural Australia in the late 1960s to early 1970s:

At the same time, there was much I recognized from my own childhood growing up in a small town in northern Vermont: the intense rivalry with a neighboring town, the teenage pregnancies, the schoolmates lost to careless driving, the drudgery of dairy farming for a living, even the boy who accidentally set fire to the pasture.

The standout of the collection for me was “a tricky place (the annual fete),” in which the adult speaker returns to the abandoned churchyard where the town’s annual fete was once held. Although the church “seems small now / almost shriveled / lifeless,” every detail of that annual event is still a clear, living memory.

Ultimately, memory itself is the tricky place when a small town kid returns later in life. He mourns for the place that is now gone, yet he had to leave it to become the person he wanted to be. I will definitely be returning to Frank Prem’s poetry again and again.

Small Town Kid Through the Years

A Disappearing Way of Life

By the middle of the 1990’s, I had observed new trends emerging in our societal routines. PC computers were landing on desks in workplaces and becoming common in households, and hand-held games were taking over the younger universe.

The roadways outside schools and their parking lots had become traffic jams. We were delivering our children to school and to their friends’ homes, and picking them up again.

The climate was also notably changing in-as-much as we could regularly expect total fire ban days on and around our traditional bonfire nights. Insurance costs for public events such as fetes and Shows were becoming prohibitive and these things which had been a staple of our lives to that point had largely withered away.

The childhood that I had experienced had disappeared to such an extent that my own young children would not believe some of my stories of those times.

One reason for writing the poems that became Small Town Kid was to preserve and ‘make real’ my own stories. I didn’t realise that they would amount – in a small way – to a social history of sorts, but where else can you read about the ‘rabbit-o’, or small town gang-fights that happened only at a particular point in time?

In the late 1990’s I returned very actively to a pursuit of writing poetry.  At the time, one of my pet peeves was the fact that I, having grown up exposed to American culture through TV and movies, knew the names of every tinpot little town that ever received attention from a movie-maker (Laramie, OK Corral, el Paso . . .), but no one knew, or felt it worth knowing, about my tinpot towns and locations (Beechworth, Stanley, Tarrawingee, Leneva). I started rectifying that by specifically referencing my locale in my writing, even though I knew I was the only one likely to notice.

On one occasion, I received feedback that a piece I’d written seemed to be told in my ‘voice’. Here is a part of it:

there’s chicken shit
on the boots of the boy
who came to the smoke
from north-east victoria.

After that feedback, there was no stopping me in the pursuit of my own voice. It became free-verse storytelling and is almost exclusively what and how I write to this day.

That poem was ‘From The Sticks’ was the first poem written for the Small Town Kid collection, and I became more and more involved in the telling of those stories from my childhood and youth that no-one else could tell, yet everyone of a certain age had experienced, whether they were born in rural or urban areas, Australia or England or the USA. I had quite a deal of correspondence, as I recall, about ‘long-drop dunnies’ and other unsewered toilet facilities from all around the world.

The experience of listening or reading these reminiscences seems to have the capacity to take a person back to their own equivalent experiences and that knowledge is what drives me still. To tell stories for a reader to make their own.